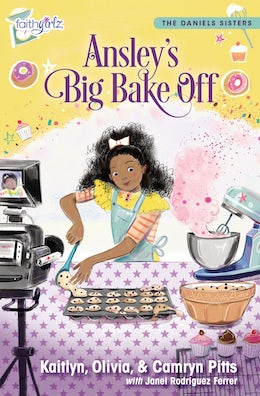 From the family that brought you the Lena in the Spotlight series and the popular For Girls Like You magazine, comes a series about three young sisters who rebuild their lives and find joy in unexpected ways after their mother’s death.

Ansley and her family move to a new city to seek a fresh start after the death of their mother. But that also means ... a new school, new friends, new everything! As they all settle into their “new normal,” big sister Lena finds comfort in singing and songwriting. Ashton and Amber record videos documenting their lives and emailing them to their grandmothers. And Ansley pursues her own dream of becoming an Olympic gymnastics. But she soon realizes that using her creativity to bake brings her as much (or even more) joy—especially since it brings back memories of time spent in the kitchen with her mom.

Then Ansley gets the opportunity to participate in the Big Bake Off at the Founders Day Fair! But her dreams of taking home a trophy and being on TV are threatened by her strongest competition: Taylor, a mean girl from her new school.

But with the loving and prayerful support of her family behind her, Ansley knows she has a real shot at winning. But with Taylor in the mix, will Ansley be able to rise to the occasion? Or will she just get burned?