The book is being published by Archway Publishing, a division of Simon & Schuster. The novel is the first by Felcyn, a retired CPA. 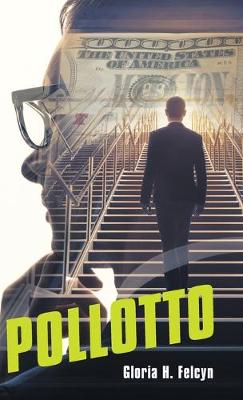 POLLOTTO, a gripping novel that centers on a revenge tale of the white-collar variety involving the IRS and Titus Miller, inventor of Pollotto, which is a consumer friendly lottery computer game played by US persons over the world.

Titus Miller is a self-made billionaire and CEO of a California company that markets Pollotto, a complex computer game that protects consumers who play the game and are unfamiliar with tax reporting laws by providing their winnings tax-free. As a result, Titus and his company have been the subjects of an intense IRS investigation for many years. So far, the IRS has been unable to penetrate the Pollotto tax structure developed by Titus's army of tax professionals. The IRS has been trying for years to gain access to the Pollotto technology and US person database, including offering Titus millions of dollars for access, which he has refused. As a last resort the IRS arranges to have conspiracy indictments filed against Titus and his company as a means of putting a stop to Pollotto and getting access to what the IRS wants.

Titus's history with the IRS goes back many years to his childhood when his father, Jacob, was audited by the the IRS after failing to report sweepstake winnings due to a lack of understanding tax reporting rules. In the audit, the IRS agent throws the book at Jacob, hitting him with excess of penalties and interest, forcing the sale of the family home in order to pay the IRS, despite the then young Titus's pleads for leniency for his father with the IRS agent, who is currently the head of the IRS.

Titus is determined that Pollotto players will never suffer the consequences that his father went through. Titus's company arranges to provide all winnings to Pollotto winners tax free. The taxes are 100% paid by Titus's company. Winners names are never disclosed to the IRS, which sets off a war between the IRS, Titus and his company. As Titus's past comes full circle, Titus must battle the IRS head who is willing to go to great lengths to getting government access to Pollotto, including divulging a Miller private family secret.

Cassandra's Review-   I had a really great time with this book it covers everything that a good conspiracy theory should to me and was so new from the other books I have been reading.
Eye opening is the best way to put the description but it leaves so many thoughts behind.