Discovering the Clown by Christopher Bayes

New from TCG Books:
Discovering the Clown, or The Funny Book of Good Acting
by Christopher Bayes, with Virginia Scott 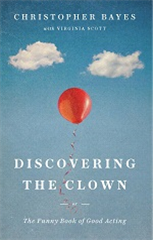 In his introduction, Christopher Bayes describes the pursuit of the clown as the search for “the authentic, playful self and its unique relationship to the comic world.” An essential read for performers of all kinds, this text takes a deep dive into theater, physical expression, and the possibilities of the comic world

Theatre Communications Group (TCG) is pleased to announce the publication of Discovering the Clown, or The Funny Book of Good Acting by Christopher Bayes, with Virginia Scott.

“Christopher Bayes is a master, an extraordinary visionary who has done more to liberate young American actors over the last two generations than I can possibly express… This book is a treasure. Nothing can replace the experience of being in the room with a master teacher, but this practical, playful, brilliant book is the next best thing. Read it. It is indispensable.”
—Oskar Eustis, Artistic Director, The Public Theater

Discovering the Clown, or The Funny Book of Good Acting is a unique glimpse into the wild world of the Clown, unveiling “the playful self, the unsocialized self, the naive self…the big stupid who just wants to have some fun with the audience.” An essential guide for artists and actors wanting to set free the messy and hilarious Clown within.

“Christopher Bayes knows where the funny lies in every actor. More importantly, he also knows where the truth lies that releases the funny. He thinks he is a Clown teacher, but he is really a master acting teacher. If you ever want to do Beckett or Chekhov or Shakespeare you better do Bayes first. I stand in awe of his gift.”
—Ron Van Lieu, Lloyd Richards Professor Emeritus of Acting, Yale School of Drama

Christopher Bayes is one of the most sought after teachers of Clown and Physical Comedy in the country. He has taught internationally and been on the faculty of many presti­gious schools, including Yale, The Juilliard School, Brown, and NYU’s Graduate Acting Program. He is the co-founder and head of The Funny School of Good Acting in Brooklyn, New York. He is currently Professor and Head of Physical Acting at Yale School of Drama.

Virginia Scott is a director/devisor/teacher of Physical Theater, and co-founder of The Funny School of Good Acting. She has taught Clown at The Juilliard School, Pace University, the Actors Center, CAP21, and Tisch School of the Arts.

Theatre Communications Group (TCG) exists to strengthen, nurture, and promote professional theatre in the U.S. and globally. Since its founding in 1961, TCG’s constituency has grown from a handful of groundbreaking theatres to over 700 Member Theatres and affiliate organizations and nearly 10,000 Individual Members. Through its Core Values of Activism, Artistry, Diversity, and Global Citizenship, TCG advances a better world for theatre and a better world because of theatre.

TCG offers its members networking and knowledge-building opportunities through research, communications, and events, including the annual TCG National Conference, one of the largest nationwide gatherings of theatre people; awards grants and scholarships, approximately $2 million per year, to theatre companies and individual artists; advocates on the federal level; and through the Global Theater Initiative, TCG's partnership with the Laboratory for Global Performance and Politics, serves as the U.S. Center of the International Theatre Institute.

TCG is North America’s largest independent trade publisher of dramatic literature, with 17 Pulitzer Prizes for Drama on the TCG booklist. It also publishes the award-winning American Theatre magazine and ARTSEARCH®, the essential source for a career in the arts. In all of its endeavors, TCG seeks to increase the organizational efficiency of its Member Theatres, cultivate and celebrate the artistic talent and achievements of the field, and promote a larger public understanding of, and appreciation for, the theatre.www.tcg.org.