What is Scrum? Scrum is an agile framework for developing, delivering, and sustaining complex products, with an initial emphasis on software development, although it has been used in other fields including research, sales, marketing and advanced technologies. It is designed for teams of ten or fewer members, who break their work into goals that can be completed within time boxed iterations, called sprints, no longer than one month and most commonly two weeks. The Scrum Team track progress in 15-minute time-boxed daily meetings, called daily scrums. At the end of the sprint, the team holds sprint review, to demonstrate the work done, and sprint retrospective to continuously improve. Thanks to Wikipedia for this information. 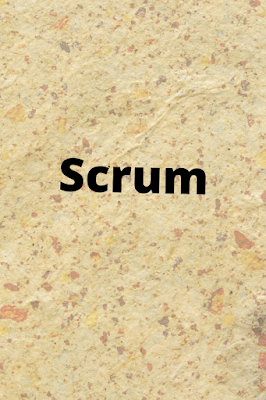 Scrum is occasionally seen written in all-capitals, as SCRUM.[4] While the word itself is not an acronym, its capitalized styling likely comes from an early paper by Ken Schwaber that capitalized SCRUM in its title.

While the trademark on the term Scrum itself has been allowed to lapse, it is deemed as owned by the wider community rather than an individual, so the leading capital for Scrum is retained in this article.

Many of the terms used in Scrum are typically written with leading capitals (e.g., Scrum Master, Daily Scrum). However, to maintain an encyclopedic tone, this article uses normal sentence case for these terms (e.g., scrum master, daily scrum) – unless they are recognized marks (such as Certified Scrum Master).

A Scrum Master? Thanks again to Wikipedia for coming to my aid.
Scrum master
Scrum is facilitated by a scrum master, who is accountable for removing impediments to the ability of the team to deliver the product goals and deliverable.  The scrum master is not a traditional team lead or project manager but acts as a buffer between the team and any distracting influences. The scrum master ensures that the scrum framework is followed. The scrum master helps to ensure the team follows the agreed processes in the Scrum framework, often facilitates key sessions, and encourages the team to improve. The role has also been referred to as a team facilitator  or servant-leader to reinforce these dual perspectives.

Check out the Scrum Institute

Helping the team to determine the definition of done for the product, with input from key stakeholders
Coaching the team, within the Scrum principles, in order to deliver high-quality features for its product
Promoting self-organization within the team

Helping the scrum team to avoid or remove impediments to its progress, whether internal or external to the team

Coaching the development team in self-organization and cross-functionality

The scrum master helps people and organizations adopt empirical and lean thinking, leaving behind hopes for certainty and predictability.

One of the ways the scrum master role differs from a project manager is that the latter may have people management responsibilities and the scrum master does not. A scrum master provides a limited amount of direction since the team is expected to be empowered and self-organizing. Scrum does not formally recognize the role of project manager, as traditional command and control tendencies would cause difficulties.